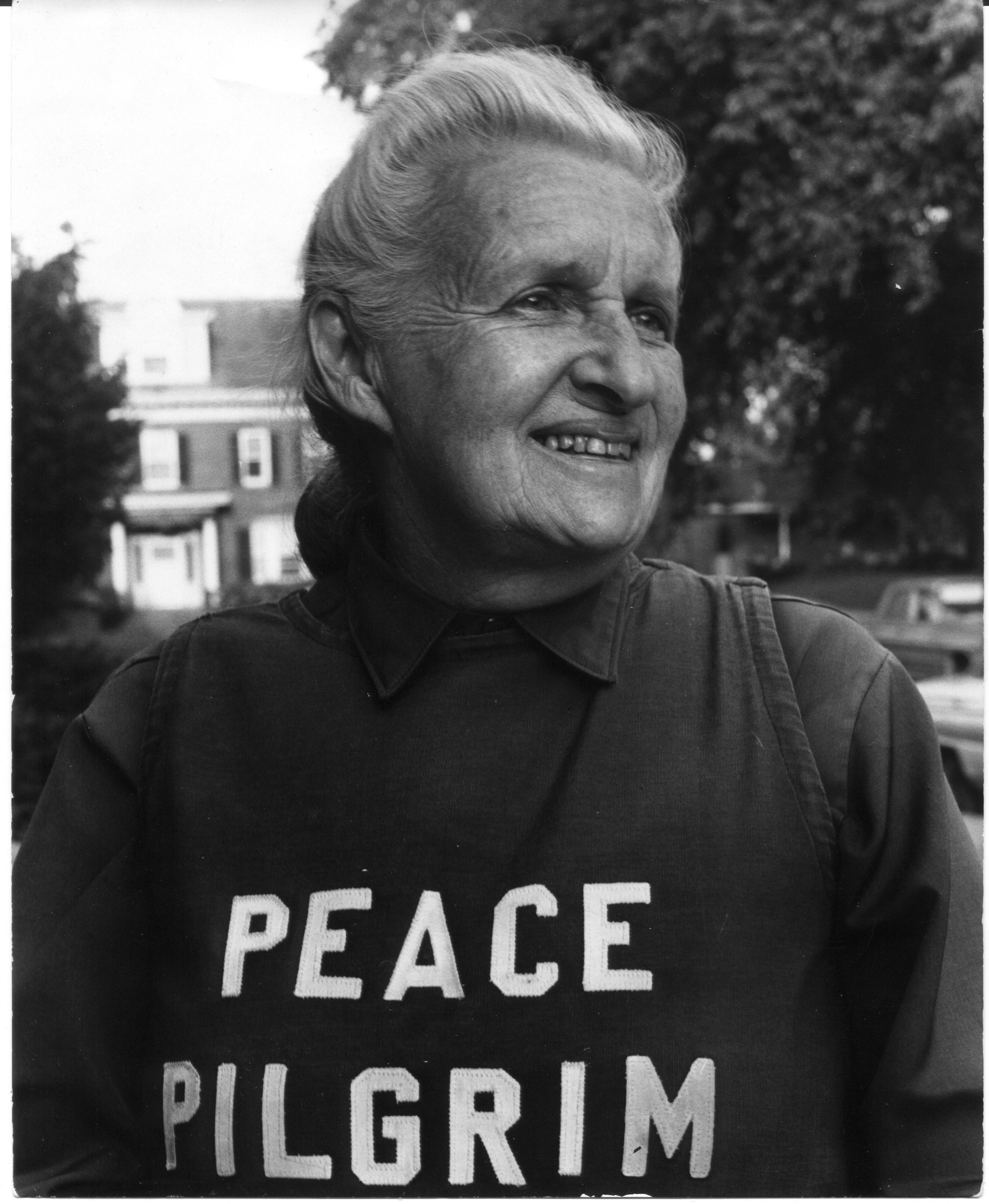 "I began to really live life

when I began to look at every situation and think about how I could be of service in that situation."

Short bios and other glimpses

Many friends, historians and followers have written about the life and legacy of Peace Pilgrim. Here are a few of our favorites. (We also include Peace Pilgrim Music and FBI correspondence below!)

Reflections on Peace Pilgrim's Life (an interview with John Robbins - 1998)
John Robbins, author of Diet for A New America and other books, founded EarthSave International, a nonprofit organization that supports healthy food choices, preservation of the environment, and a more compassionate world. This excerpt is from a with Robbins conducted during the filming of the documentary Peace Pilgrim: An American Sage Who Walked Her Talk.

The Living Legacy of Peace Pilgrim - Marking 50 Years (by Mary Newswanger, 2003)
Mary Newswanger, a member of Monteverde Friends Meeting in Costa Rica, worked closely with , former assistant secretary general of the United Nations and chancellor emeritus of the UN University for Peace, to honor Peace Pilgrim with a life-size bronze statue on the University grounds. The statue was dedicated in 2000; Mary wrote this article in 2003.

Peace Pilgrim's 1952 Appalachian Trail Journey (compiled by Bruce Nichols)
Friends of Peace Pilgrim Board Member Bruce Nichols chronicled the journey of pre-Peace Pilgrim Mildred Norman Ryder, the first woman to hike the entire AT in one season.
Also see (2020), (2016) and (2015), three articles that also highlight her AT achievement.

(NPR radio broadcast by Zak Rosen, 2013)
On New Year's Day in 2013, the 60th anniversary of the start of Peace Pilgrim's pilgrimage, National Public Radio broadcast this 9-minute feature on the popular series, All Things Considered.

(Peace Pilgrim 1908-1981)
Thousands of her friends – old and new – were deeply shocked and saddened when they learned of Peace Pilgrim’s sudden passing in a head-on collision in Indiana. But Peace was most likely rejoicing on that day, July 7, 1981, when she made what she often called a “glorious transition to a freer life.” (Also listen to her, done the day before she died.)

(The Sun Magazine, February 2020)
A beautiful biographical introduction is followed by some of Peace Pilgrim’s insights, observations and advice excerpted from the book, Peace Pilgrim: Her Life and Work in Her Own Words.

These FBI documents, secured by her Friends, offer an interesting sidebar on her life, her family and the times in which they lived. Many of the letters were redacted before we received copies.

Music by and about Peace Pilgrim

Peace Pilgrim loved music. She learned to play piano at a young age and often put new words to familiar tunes. On occasion she created both words and music in new compositions.

Soundtrack from the .
香蕉视频app安卓by Shelley Koffler

Text from Peace Pilgrim book (page 168) put to music and sang by Swedish musician Vera Renella of "The Offering."

by Jimmy Braskett, inspired to write this after discovering the Peace Pilgrim website.

by the Hoodie Monks, a Japan-based rap group that shares Buddhist wisdom. They used Peace Pilgrim's Steps Toward Inner Peace 香蕉视频app安卓as the basis for this song.